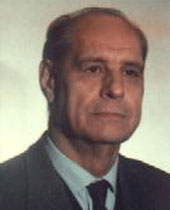 Unfortunately and inevitably continue to leave us, as I said at other times, the “columns” – the Founder Colleagues of the AIBG with which many of us have shared initiatives, interests and sometimes battles, but also many successes.

Giovanni Chieffi, Professor Emeritus of General Biology of the Second University of Naples and our Emeritus member, has now moved away with our great regret.

He was a man of other times not for reasons of age but due to his style. His scientific, academic and management activity in general, has been projected ahead his time, with declared modernity. He was a colleague who, during his qualification and career, in addition to periods of study and collaboration abroad, had a path that today I would call rare. Indeed, he taught courses for different disciplines (Genetics, Histology and Embryology, Zoology, Comparative Anatomy and finally General Biology of Medicine) but carrying out his service in several Italian locations (Rome, Camerino, Naples) and with different roles and prestigious results.

I remember, especially to the younger Colleagues, that our Association was born in a historical period of organizational turbulence for the university institution and because at the same time there were widespread conflicts between the university sites that produced disagreements and injustices substantially damaging the community. It was a time of proposals for the transformation of the university system and the recruitment mechanisms but, fortunately, there were many researchers in the area of ​​Biology and Genetics who lived with great enthusiasm the gallop of scientific and technological innovations, which were firmly convinced of the need to avoid both the cultural immobility and the fact that the destinies of the Universities, and therefore of the researchers, were already written, a priori, and by a few people.

At that time Giovanni Chieffi was among the first to realize the necessity to constitute a juridical figure able to represent the needs of the community in institutional venues, to be its sole spokesperson but also to have a democratic body for the coordination between the Schools of the national territory; therefore, to be a functional tool for the scientific growth of its members and a means to plan the establishment of the sites and their researchers by supporting their scientific development and the consequent academic valorisation.

For these purposes, Chieffi strives with authority and energy, along with a few others, preparing proposals and documents and identifying the most suitable cultural and reference substrate. He contributed to determine consents that, after difficult and troubled years, lead the Assembly of Associate and Full Professors of General Biology and Genetics (mostly from the School of Medicine with few from Sciences and Psychology) to approve, on November 6th, 1990, the statute of an “Academic and Scientific Cultural Association” to be set up. The last came to be established, through a notarial deed, on November 13th, 1990, in Naples (Giovanni’s institutional headquarters and at a notary friend of him). The Association was named “Italian Association of General and Molecular Biology and Genetics”, while the provisional Board appointed Giovanni Chieffi as the first President, who held this office until 1995.

I intensely lived with Giovanni the period of the genesis of the Association, first along the arduous path of debate and proposal, then in the initial phase, always in harmony and full cooperation. At that time I was “the little one”, but I was also particularly enthusiastic and active so that Giovanni recognized me as a loyal, proactive and efficient collaborator, to the point that, to my great satisfaction, he acknowledged this in private, in writing, and publicly.

He was a practical man, of unusual ability in the management and organization of university events. He smoothly shifted among classrooms, laboratories, ministries, offices, politicians and friends; ready for cultural and innovative initiatives, for academic “connection” actions, for new proposals, to suggest how to solve problems. In short, he was particularly accustomed to dealing with topics, whatever they were, always directly, with energy, attitude and determination. I well remember the indecisions, the different opinions among so many of us, the difficulties of balancing the needs of groups of colleagues – of different cultural backgrounds – who were going to achieve the goal of a single, homogeneous, scientifically valid and academically strong association. Giovanni was ready to dilute contrasts and divergences, sometimes with persuasion or with impetus and energy. He operated with skill and efficiency convinced of the goodness of the ideas, of the debates, of the aims that had led to found the association and constituting, then and now, its skeleton.

I have the pleasure and duty, at this moment, to express to Giovanni, even today that he is no longer with us, the gratitude for having supported the growth of the Palermo site (also of others to be true!). Many of us know (I am convinced of it, anyway) that the current academic “structure” of today’s BIO/13, and consequently also the qualification and affirmation of its Professors and Researchers, is due to long, sometimes harsh, debates, together with enlightened initiatives and the many efforts of a few people, including Giovanni. They were committed to characterize our community, to make its scientific quality grow, to establish a critical academic mass, to welcome the demands from the sites with proper management and balance (all, from North to South).

I remind myself, and all of us, that Giovanni has carried out innovative research by performing, as a forerunner, scientific activity in the field of comparative endocrinology as well as embryology and comparative physiology of reproduction. His academic initiatives and his research allowed him to found an academic and scientific school in Naples, whose value of yesterday and today is known to all. His interests spread over time, and I remember well, to offer one example, the passion with which on several occasions he entertained me on the emerging problems of Bioethics (he was also Director of the Interuniversity Center for Bioethical Research) and on the related social implications still in the rigour of scientific methods. The commitment and energy he dedicated to the “Accademia dei Lincei” come not least.

I want to apologize to the reader for having, in this short essay, recalled some personal memories, interspersing them with “splinters” of associative and academic history. As an oldie, though, I believe, along with others, fortunately, that memory and the past have the intrinsic strength of guaranteeing future!! In this regard, I am convinced that those having the rudder in their hands were able to draw a good course.

I participate with emotion in the mourning of the Chieffi Family and the pupils of the Neapolitan School. Still, in particular, I extend an affectionate embrace to Paolo, a younger colleague who I have followed in times long gone, participating, from the beginning of his career, in the anxieties of Giovanni about the choices of training courses and the future of scientific and academic growth.